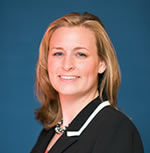 Sara Compher-Rice received her B.A. from Denison University (Granville, Ohio) in 1999 with a major in Political Science and a minor in English Literature.

Sara has practiced with Steve Oberman since her graduation in 2002. Since that time she has worked diligently to devote her education and practice to the defense of those charged with DUI in Knoxville, Tennessee, as well as other jurisdictions across the state. She is licensed in all Tennessee state courts as well as the federal court in the Eastern District of Tennessee. Although the vast majority of Sara’s practice is focused on driving under the influence, she also represents clients charged with related offenses, including Implied Consent Violation, Underage DWI, Boating Under the Influence (BUI), Underage Consumption of Alcohol, Underage Possession of Alcohol, Drug Possession, Traffic Offenses, and Commercial Motor Vehicle related DUI and Traffic Offenses.

Recognizing the importance of staying on the cutting edge of the latest legal, legislative and scientific developments in DUI law, Sara spends many hours at national DUI symposiums each year and also assists Mr. Oberman in the extensive research and writing of his books, DUI: The Crimes and Consequences in Tennessee and Drunk Driving Defense. In 2003, 2004 and 2006 she received certificates of completion from the National College for DUI Defense, Inc. Summer Session held at Harvard Law School in Cambridge, MA.

Sara has lectured to both local and national audiences on the topics of DUI Defense, Ethics and Courtroom Technology. She has also authored multiple articles relating to DUI Defense. Sara is also proud to have been recognized by her peers and clients, earning the top 10.0 rating from http://www.avvo.com.

Sara is a member of the National College for DUI Defense and the National Association of Criminal Defense Lawyers, for which she serves as Vice-Chair of the DUI Committee.  For more details about Knoxville DUI/DWI lawyer Sara Compher-Rice’s background and experience as a Tennessee DUI attorney, you may view her resume/vitae.

In her spare time, Sara serves as President of Province 14 of the international legal fraternity, Phi Delta Phi, working with law school students across Tennessee, Kentucky and southwestern Virginia. She also enjoys volunteering her time with the March of Dimes.

Copyright © 2002-2023 Oberman & Rice Law Firm. All rights reserved. Re-publication or redistribution of this content is expressly prohibited without the prior written consent of Steven Oberman. The information within this web site is intended to provide some general information about DUI laws and about Knoxville, Tennessee DUI Lawyers Steve Oberman, and Sara Compher-Rice. Mr. Oberman, and Ms. Compher-Rice anticipate that you will have questions about how they can best represent you in your Tennessee DUI, criminal or traffic case. Please do not hesitate to discuss with Knox County DUI Attorneys Steve Oberman, and Sara Compher-Rice, any aspect of your Tennessee DUI case, their resources, or how they can better represent you. It is their hope that you will be completely satisfied with their work and will become one of the many clients of the Oberman & Rice Law Firm who refer our firm to their family and friends. DISCLAIMER: Any contact through this web site, including, but not limited to, email, electronic submission, and/or telephone communication, does not create an attorney-client relationship with any member of the Oberman & Rice Law Firm. Until an attorney-client relationship is agreed to by Mr. Oberman, or Ms. Compher-Rice, you are not a client. Do not send any communication which you expect to be kept confidential, and you are hereby advised that any information that you do send may not be held confidential. The determination of the need for legal help, legal services and the choice of a lawyer are extremely important decisions and should not be based solely upon advertisements, certification, specialization or self-proclaimed expertise. Potential clients are urged to make their own independent investigation and evaluation of any lawyer being considered. Tennessee DUI Attorneys Steve Oberman and Sara Compher-Rice shall not be liable for any errors in the content, or for any actions taken in reliance thereon. ACKNOWLEDGMENT: Most of the beautiful photographs of the Knoxville, Tennessee area exhibited on this site are provided through the courtesy of and with the permission of acclaimed photographer Gary Heatherly. Mr. Heatherly retains all intellectual rights to his photographs. Mr. Heatherly may be contacted at Gary Heatherly's Photography.. Oberman & Rice Law Firm 550 Main St. Suite 730, Knoxville, Tennessee 37902 Office: (865) 249-7200 Fax: (865) 540-1696